Everyone expected pharmacare to be a part of the federal budget, but it didn’t happen. Sharon Batt helps to shed some light on the situation.

[Editor’s note: In Budget 2018, the Government of Canada announced the initiation of an Advisory Council on the Implementation of National Pharmacare. However, last month’s budget didn’t include any pharmacare program. Sharon Batt, Dalhousie University’s adjunct professor, scrutinized a Canadian Federation of Nurses Unions report and discovered some traces of large pharmaceutical companies profiting from such outcome. They have started an active lobbying involving PR and public campaigns against the pharmacare plan. Here are some fragments of the report.]

How to stop pharmacare from happening: first of all, gain power

After the National Pharmacare was announced to be covered by the federal budget in 2018, a significant increase in lobbying of insurance and pharmaceutical companies’ interests has emerged. It is unclear what sums of money are involved into this anti-medicare campaign. It is also almost impossible to see the whole picture by tracking down all the companies and billionaires connected to the scheme. But despite that, there are undeniable proofs, which show that intricate and sophisticated schemes were developed in order to lobby opposition’s interests. 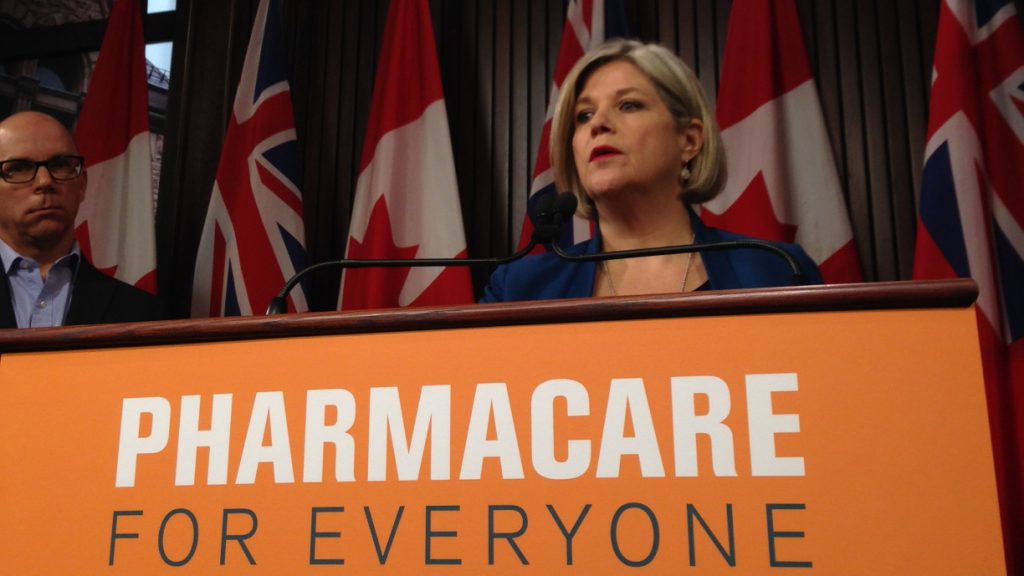 In April 2018, the House of Commons Standing Committee on Health (HESA) published a statement, which supported government-funded pharmacare. Shortly after that, members of the Canadian Life and Health Insurance Association (CLHIA) disputed this decision at a lobby day event. They claimed that such intention could affect the quality of healthcare adversely.

Subsequently, it was the time for advertising associations to step in. They revealed their key position, and it was clearly in favor of private insurance industry’s market share preservation. In May, June and November 2018 the Hill Times published short ads, supporting this standpoint. The ads implied that any coverage modifications will only add yet another layer of targeted promotional coverage to the present public-private affairs.

Other than that, these associations turned to social media sites. They used Twitter in order to broadcast their main idea. During the annual summit in St. Andrew’s by-the-Sea, New Brunswick, CLHIA distributed ads, which showed up repeatedly and were geo-located to the village with about 1,500 residents. The obvious purpose of the ads was to transmit to the influential authorities the message against the general and universal pharmacare.

Since the initiation of the advisory council, CLHIA’s lobbying activity increased by approximately 60%, as specified by the Office of the Commissioner of Lobbying. The data demonstrates that Big Insurance builds up their efforts to prevent the successful approval of the national medicare. In case of endorsement of the pharmacare plan, the pharmaceutical industry would suffer significant losses in light of promising potential financial gain. This is mainly because the government would have a strong position when it comes to negotiating medication prices.

The Patented Medicine Prices Review Board issued a report, which demonstrates that over the last ten years the number of patented medicines with a yearly cost of $10,000 and higher trebled. Currently, about 40% of licensed medicine sales are attributed to them. In comparison, in 2006 the number was at the point of only 7.6%. This kind of drugs is used by just 1% of people. To a great extent, such expensive pharmaceutical market is maintained by Canada’s present medicine funding system.

In 2018, another large association commenced with an active lobbying and promoting ads. For instance, in 2017 the IMC had only 18 lobbying meetings, but in 2018 the number went up to 104 meetings. That is a 500% rise in active campaign. Also in 2018, Innovative Medicines Canada (IMC) managed to publish 15 ads in the Hill Times. Mostly, the ads stated that medicare could cause a drug shortage among the patients. It could also become the reason of unemployment, reduction in R&D investments and complicated modern treatment accessibility.

As a matter of fact, after 2000, industry income has increased dramatically, whereas R&D has seen better days. Over the last 20 years, both in Canada and abroad, it became popular among the pharmaceutical corporations to sponsor patient advocacy groups. Most of the time, these groups are very small organizations, whose aim is to bravely protect the rights of the defenseless patients. Usually, they are seriously limited due to the deficiency of financial support.

In autumn 2018, an interesting story was published by the Globe and Mail. It was about a head of the organization that supported patients who suffered from arthritis. He went to a meeting, where everyone at the end was asked to sign a special message. It stated that the person signing this is strongly against the idea of replacing their brand name medication with the less expensive drug with the similar composition. In exchange for that, the group would get funded. Two organizations involved were Janssen and AbbVie. Some group members understood that they were taken advantage of and refused to sign the report. After that, Janssen denied group’s sponsoring.

Apparently, cases like this are quite common nowadays. The majority of such advocacy groups are poorly funded, so it is often the only choice they have. However, it is rather difficult to know exactly how many groups are being influenced like this, because, usually, the sponsoring companies don’t like to be exposed. However, there are some examples of organizations that openly disclose their financial support, such as GlaxoSmithKline. But it is rather uncommon and most likely their public data is only a drop in the ocean compared to the sums that are actually involved. All of this illustrates, that Big Pharma is actually capable of taking advantage of under-funded patient associations and use them to increase its power and influence.

Next step: spread your message

Persuading people through the media is a great strategy that can help to tip the scales in commercial favor. Think tanks, or special group of experts, are an effective tool in this mission. They broadcast information to the public in order to influence their positions. Their main goal is to convince people that medicare is a negative thing and it shouldn’t happen. Such expert groups are usually sponsored by rich contributors. All of them are somehow connected to the pharmaceutical business organizations. The identities of the donors are almost impossible to disclose. However, there are a few examples that can show some fragments of the big picture.

For instance, one of them is the Aurea Foundation, created by Peter Munk. It is a charitable Canadian organization, which publicly funded numerous think tanks, including the Macdonald-Laurier Institute, the Montreal Economic Institute and others. The total amount of donations is around $8 million. The Westons family is another example. They often co-operated with and repeatedly funded the Fraser Institute.

Apart from domestic influencers, a lot of foreign companies actively took part in the process. In 2004, the Pharmaceutical Research and Manufacturers of America (PhRMA) spent about $150 million on various projects aimed for Canada as well as foreign governments. The goal was to influence patients, doctors, different medical facilities and universities and to incline them to become opposed to the idea of pharmacare. PhRMA also planned on using extra $1 million to completely reshape healthcare system in Canada. PhRMA’s main intention was to make sure that drug prices stay high.

Since 2000, the Fraser Institute was given almost $4.3 million worth funding. Most of the money was donated by Eli Lilly and Co. Foundation. Also, some donations were made by the Charles G. Koch Charitable Foundation and the Searle Freedom Trust. All of them are connected to the pharmaceutical industry.

The expert groups in Canada were also sponsored by Atlas Network, established in the USA. Antony Fisher is the head of the organization and his main goal is to make free-market expert groups extremely popular. Atlas Network has a lot of partner-companies and actively encourages the formation of the new various think tanks both in Canada and in other countries. Atlas Network’s partners and people involved in sponsoring and donating money are closely linked to the pharmaceutical segment.

The Fraser Institute is one of the most famous Canadian think tanks. It was created in 1974 in Vancouver and since then supported its position against pharmacare. The Institute has contributed to the anti-medicare campaign by publishing numerous articles, in which the universal single-payer industry was criticized. They warned people that pharmacare might not be the thing that they need right now and encouraged them to consider staying with the private drug companies. The Institute also used regional newspapers by publishing opinion pieces. By doing this, they tried to persuade more new people across the country.

The Macdonald-Laurier Institute did basically the same thing with newspapers. In 2018 it issued 5 articles and 3 opinion pieces with the similar idea against single-player pharmacare. The Canadian Taxpayers Federation and one of the Atlas Network’s partners, the Montreal Economic Institute have also joined the large-scale campaign. Powerful authorities and Big Pharma have been working hard for a long time now to make sure that people will not get the medicare system approved. They use all the possible methods to influence public opinions and to promote their opposing point of view.

Medicare is the thing that Canadians so desperately need. It would ensure the better access to drugs and modern therapies, adequate medicine coverage and appropriate prices. Private pharmaceutical organizations are the only ones who would suffer losses from pharmacare. Diverse and influential variety of organizations, institutions and groups launched an active anti-medicare campaign. They try to leverage their power by publicly lobbying their position through advertising and funding special think tanks. With the federal elections around the corner, it is important for Canadians to be able to defend their interests and protect their right to a fair and transparent health-care system with moderate prices and quality services.